3 Features that Kotlin can help to write Android custom views

Writing custom views or view groups is quite common nowadays, but sometimes it can be really cumbersome. You have to write overloaded constructors so that they would work properly in layout editor, or you define and implement some interfaces so that you don’t have to copy and paste the same code in different subclasses. With Kotlin we can easily avoid those common pain points when writing custom views and still enjoy full interoperability with Android!

Let’s get to the point straight. (This seems to be the norm recently). Kotlin provides:

Nothing is better than some real examples, right? Let’s implement some “custom font views” together! I believe writing custom font text view is one common task that every Android developers has done. Even if you have not, your company might have already had a shared library for you to use anyways.

I know the recently support library v26 has already implemented features like Fonts in XML or Downloadable Fonts, but most of time you might still have to use your own implementation because you must use custom fonts other than Google Fonts.

Also the techniques can be applied any other kinds of custom views.

I have created a sample app on Github. It has only one activity with a custom text view and a custom button that are written in Kotlin, and shows a custom typeface loaded from assets directory. In the repo I also include the equivalent Java implementation in alternative package to show the differences.

When you run the app it should look like: 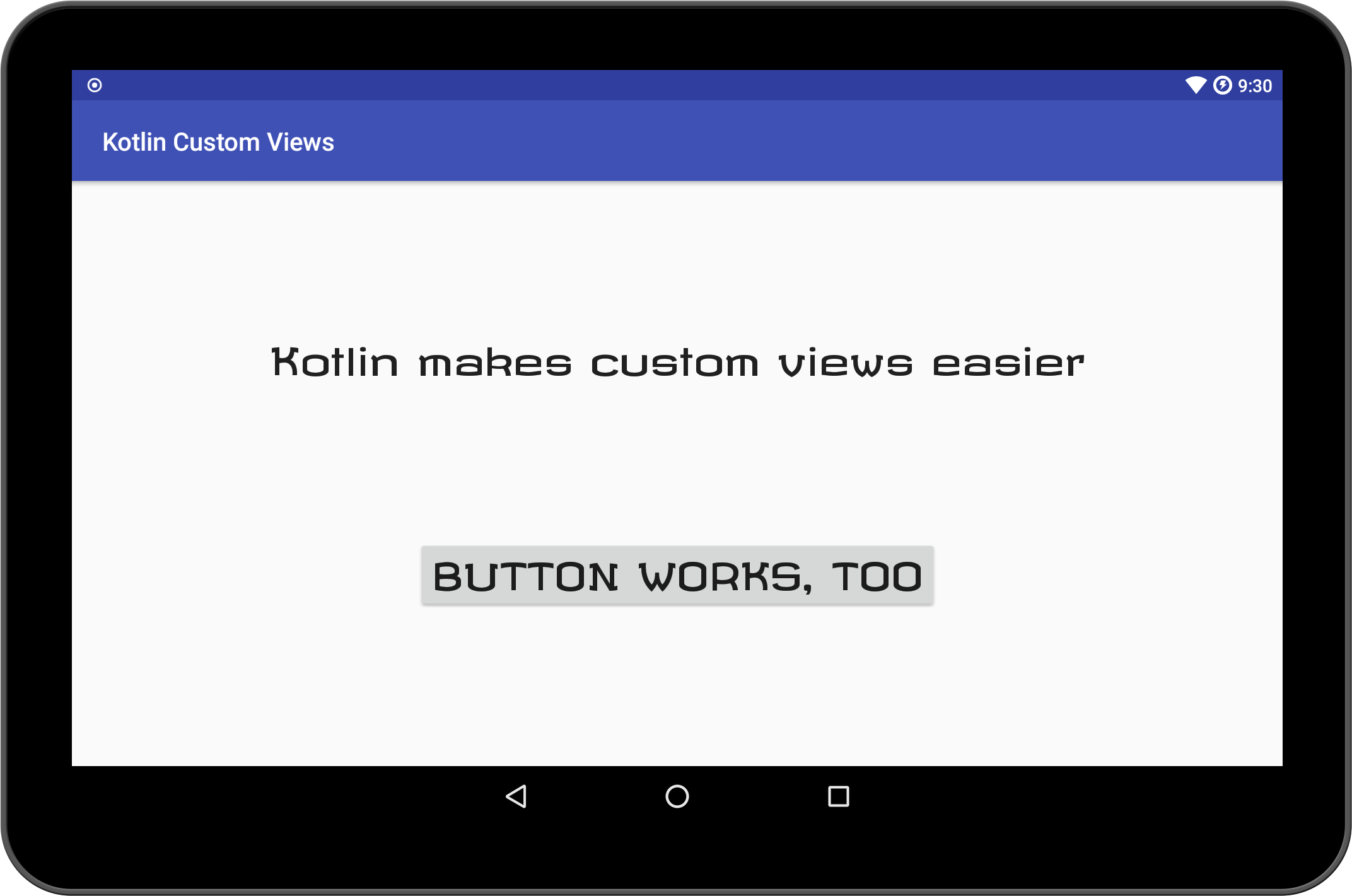 Here is the main kotlin file for all the custom font views:

Let’s go through the techniques I use together.

When writing custom views in Java, you probably would ask yourself which constructor should I override? The answer is simply “it depends” because each one has its own use case. If you want to understand the difference more, Dan Lew has a blog post A deep dive into Android View constructors for you to read.

So with Kotlin we can define only one constructor with all three arguments and provide desired default values to achieve the same behavior. It would work just fine in code. However when Android framework read the XML with your custom views and it would still fail because it uses reflection to initialize your custom views (that’s also why you have to include the full qualified class name in XML layouts for custom views).

The @JvmOverloads annotation comes to save our time. Adding the annotation will:

Instructs the Kotlin compiler to generate overloads for this function that substitute default parameter values.

If a method has N parameters and M of which have default values, M overloads are generated: the first one takes N-1 parameters (all but the last one that takes a default value), the second takes N-2 parameters, and so on.

In our use case it would generate all three constructors we need if you supply default values to attrs and defStyleAttr.

Because our custom text view, button, and edit text all do the same thing: read and assign custom typeface, we create a shared function readTypeFace to read declared font files.

In Java, you would need either a separate class usually called *Utils.java (like what I did in the sample code) or an interface for all the custom views to implement and somehow execute a common code path to assign typefaces (sounds weird but I have seen this approach somewhere).

So how can Kotlin help here? Top level function is the answer! Kotlin breaks the line of having to declare a separate class for one method by supporting top level function and properties declarations in file level. On top of that you can also declare multiple public classes in the same file. (Java can have more than one classes in the same file, but they cannot be all public)

In CustomFontViews.kt file, I simply put all my custom font views in it and have a shared function to help me read the typeface. They’re all in the same place so I easily tweak them without jumping through different files anymore.

You might also notice that I declare readTypeFace as a private function. It simply becomes an implementation detail of my custom font views. When accessing these custom views, you don’t need to know about the function and don’t even see it in the IDE unless you’re editing the file where it’s declared.

Think about the common Java approaches I mentioned earlier. Having a common *Utils class or interface is great but everyone outside your custom views also has the access to it because they are public. It inevitably leaks the implementation details!

Kotlin also provides a new internal modifier you can use. It means the declaration (class, function, property) is visible only within the same module (think of the module as a library jar or gradle module). It can be very useful when you’re building a library for other developers to consume and you don’t want to expose the declaration.

With Kotlin writing custom views can be much more concise and elegant. You should try it out too. Happy coding with Kotlin!

A software engineer who does Android, Server(less), and Kotlin development and enjoys learning new technologies

The title might sound weird at beginning since many modern libraries or tools are designed to make developers write less code via ways like code generation or reflection. Those libraries are great and convenient to use because we write less code. However in my experience sometimes developers become careless and misuse those libraries by calling them everywhere they could. Eventually the codebase becomes difficult to read and maintain. Here are some examples I have seen many times and would like to share with you.

This is not something fancy or magical about Kotlin at all, but I was asked about this multiple times in the past few months, so I think this may be something worth to share.

In my previous post Kotlin “By” Class Delegation: Favor Composition Over Inheritance I covered using by keyword for class delegations. You can easily reuse and compose existing concrete implementations in your code. In this post I will be going over using the same by keyword for properties and how you can use them to create reusable code and reduce awkward boilerplate code. I will also include some Android specific samples with delegated properties.

KotlinConf is the first ever conference that is all about the new favorite language Kotlin. The event is held by Jetbrains officially at Pier 27, San Fransisco. It is two day long and you can see many developers from big companies like Google, Gradle, Pivotal, Facebook giving talks or or attending events themselves. I was lucky enough that I purchased my ticket for $99 on the first day they announced the event, and four friends/coworkers of mine went together, making this event even more enjoyable.

When people ask me why Kotlin over Java, I often say because Kotlin is a better Java. You get more than half of Effective Java implemented for you. In charter 4 of the book, the author lists many items about inheritance because it is very error prone. The most well known item probably would be Item 16: Favor composition over inheritance. To implement that item, Kotlin introduces a special key work by to help you with implementing delegation in a single line.

A week ago I was thinking of writing a small Kotlin command line tool to read some local json files. I opened IntelliJ and started a kotlin project with gradle. Everything worked just fine. I could compile and run the output jar file until I imported autovalue. Autovalue uses annotation processor to generate model objects, but IntelliJ just would not invoke annotation processing properly so the compilation failed. I did some research and finally made it to work, and I think these tricks are worth to share.

Connect Your Repository to Docker Hub via Automated Build

I use gitlab and its built-in CI for my person blog (see details). Today I was trying to “update” hugo in the docker image, and I found myself making a couple of mistakes, including losing the dockerfile for the base image I built a long time ago! I decide to recreate a new one and push the Dockerfile to public repo so that everyone can reuse it.

Genymotion is the most popular replacement for Android emulator, but by default it does not come with Google play services and play store. You will have to follow this guide and manually install one or two zip files to install required files. But now with version 2.10 Genymotion adds a one-click installer to automate the process!

3 Features that Kotlin can help to write Android custom views

Writing custom views or view groups is quite common nowadays, but sometimes it can be really cumbersome. You have to write overloaded constructors so that they would work properly in layout editor, or you define and implement some interfaces so that you don’t have to copy and paste the same code in different subclasses. With Kotlin we can easily avoid those common pain points when writing custom views and still enjoy full interoperability with Android!

Kotlin defines a few of extension functions like with() and apply() in its Standard.kt file. You probably have seen some of them in various tutorials or even used them already. Sometimes you may also wonder which one to use. In this post, I will walk through those confusing functions and see if we can understand the differences.